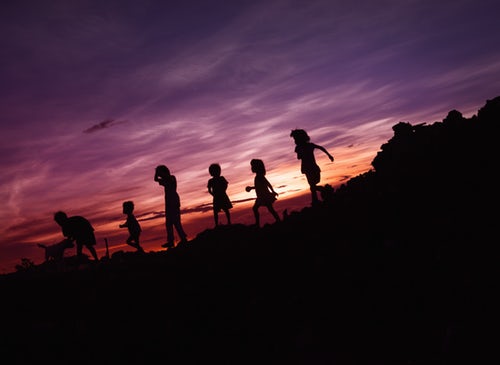 How motion / had to cut into a surface, laced to danger, / and that was called elegance.

A heavy door opened then swung itself shut. The fumes
wafting in
were warm salt. Naked older women in the showers.
You didn’t understand
the care they gave themselves. How soft
their skin looked,
how pale. You were always too red in the mirror.
Then you left
the antechamber, to a place where you could see mothers and babies
become weightless.
There was a ramp that mimicked shore; you got wet little by little.
The sun could come in.
It was quiet in echoes. It got deeper.

No one was watching except a coach.
The trees had to stop to let you play.
You wore skirts and that
was the main thing. There was a girl
named Lorraine with pearl earrings
and the best calves. The sticks felt
like real wood when nothing was real wood
anymore. The ball made a thwack
when hit, had weight, could hurt.
You wore mouth guards: the taste of plastic
and acid. There was a lot of burn.
You felt lost out there.
The leaves were also burning.

3.
You couldn’t see as fast
as you were moving. Prelude
to driving a car: your eyes released
from anchor. You weren’t located. You were
elliptical, like a race horse.
Cold wet air rushing past, shock of white
white white under fluorescents. How motion
had to cut into a surface, laced to danger,
and that was called elegance.
A certain underarm warmth developed in the coat.
Your ankles hurt from being bound so straight.
There was a problem: you could
keep going, but you couldn’t stop.

Claire Eder’s poems and translations have appeared in the Cincinnati Review, [PANK], Midwestern Gothic, and Guernica, among other publications. She holds an MFA from the University of Florida and is currently pursuing a PhD in creative writing at Ohio University. Find her online at claireeder.com.

Two times a day, I measure chia seeds / To straighten my clavicle. / Nothing helps / With good posture like even shoulders.